“Whoever drinks from me will turn into a deer“

Close menu
A surprising characteristic of Cornelia Schleime’s portraits is that they respond intensively to the viewer’s gaze.
The initially disconcerting paintings and drawings in her latest series of works, Camouflage, depict portraits in a rather new and radical way: humans and animals coalesce to form fantastical zoomorphic hybrid figures.
Without references to the mythology, religion or cultural history of the zoomorphic hybrid figures, Cornelia Schleime’s new series of works can be seen instead as a series of experiments on the possibilities and limitations of the portrait. The title refers to techniques of concealment and disguise: the women in the Camouflage pictures hide themselves in their animalistic metamorphoses. It is not clear what they are seeking protection from. Only one thing is sure: they are not playing a flirtatious game of hide-and-seek, the aim of which is to be discovered. 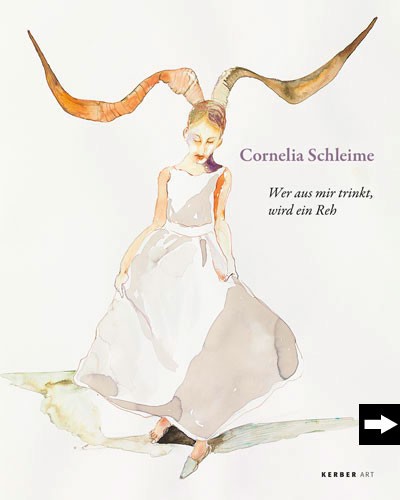 When it comes to love and art, I know exactly what I don't want
€420.00
( 515.76CHF )
Details
Trusted Shops Reviews Toolkit: 1.1.7
We use cookies on our website. If you stay on the site and continue browsing, you agree to the use of cookies. Further information can be found in our privacy policy.
Accept