Close menu
Between 1954 and 1988, Wolf Vostell staged more than 50 happenings in which spectators became participants. His abandonment of the studio in favour of the street marked a pioneering development in European performance art. It also enabled him to involve ordinary people in the artistic process and to move them to play a more creative role in society. This first major publication on Vostell’s happenings reconstructs the events he planned as multimedia collages of pictorial and theatrical modes of expression. The sketches and scores are extensively documented, as are numerous concepts and photographs from Vostell’s own happening archive at the Museo Vostell Malpartida. Besides affording us an insight into his plans and processes, the book also affirms Wolf Vostell’s status as one of the drivers of holistic projects combining both art and life. 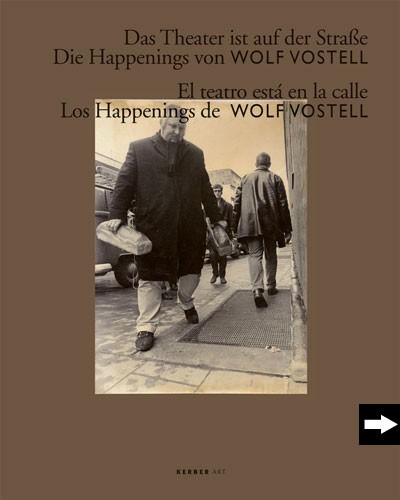 Close menu
The Theatre is on the Street

Events
The illustrated book was published on the occasion of the exhibition „Das Theater ist auf der Straße. Die Happenings von Wolf Vostell“, 6 June to 15 August 2010, Museum Morsbroich, Leverkusen, and October 2010 to January 2011, Consorcio Museo Vostell Malpartida, in the context of the project line „Europäische Partnerschaften“ of the Kunststiftung NRW and the Goethe-Institut.