Close menu
“I can’t think of any other event that had such a huge effect on me as seeing the images of September 11,” says Christoph Faulhaber, who was in New York in 2002 where he observed how the collective shock was experienced and how the event was dealt with, discussed and exploited. These observations raised a number of questions for the artist: Which cultural and artistic strategies act and react in this horror vacui? Which creative and aesthetic concepts develop in such a heightened emotional and political environment?
This study – “a memorial of a process” and “a fragment in the fabric of collective and global reflections”– tries to find answers in the public process and in the democratic struggle to rebuild the WTC in New York and to show the complex discourses that are intertwined with one another: politics, morality, aesthetics and symbolism. 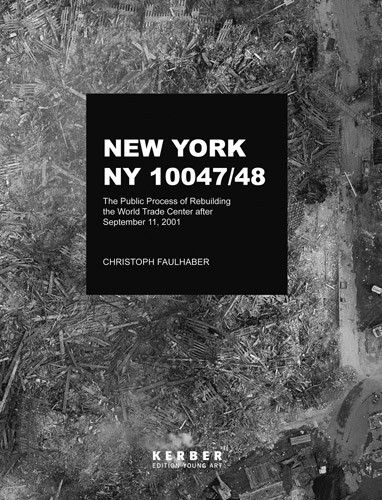 Events
The illustrated book was published on the occasion of the exhibition „Playing the City 2“, 9. bis 26. September 2010, Schirn Kunsthalle Frankfurt, Frankfurt am Main.