The "Architectural Rearguard" is a photographic rapprochement of Germany’s architectural inheritance from the Third Reich. The goal was to observe how the architecture of this period German society and history is dealt with today. What is life like in and around these buildings built between 1933 and 1945 in Nazi Germany?
Between 2001 and 2006, a collection of 130 photographs was created, taken at 32 locations in Germany. In 2002, during the initials stages of The Architectural Rearguard, it won its first awards like the “Otto Steinert Prize from the German Society of Photography (Deutsche Gesellschaft für Photographie) and the “Reinhard Wolf Prize” from the German Association of Freelance Photographers (Bundesverband Freischaffender Fotodesigner).
The photographs were not intended to be mere reproductions of facades; instead, they were to investigate how Germany in the 21st century deals with the results of the Fascism of the 1930s and 1940s.
Each one of these buildings was constructed for an ideological purpose: can these implicit messages still be detected in this architecture today? 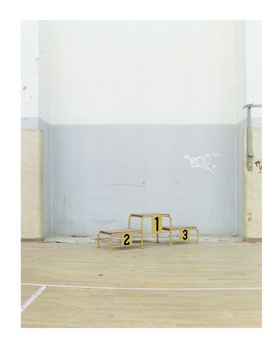