Close menu
The new series of works by Marc Lüders consists of twenty-eight “photo-pictures”: works that integrate photographs taken by the artist at the East Side Gallery in Berlin near Oberbaum Bridge.
The East Side Gallery is a section of the Berlin Wall that was painted by 118 artists from 21 countries in 1990, an artistic comment on the political changes of the years following the fall of the wall. Meaning is created when Lüders photographs the wall and its fictitious visitors today, in front of the graffiti art that is in great need of repair, and also because the popular site is threatened by new development.
In rapidly changing Berlin, the crumbling, obviously disintegrating East Side Gallery will soon no longer exist. Or at least not in reality, only as an imaginary, intermedia “photo-picture” by Lüders. 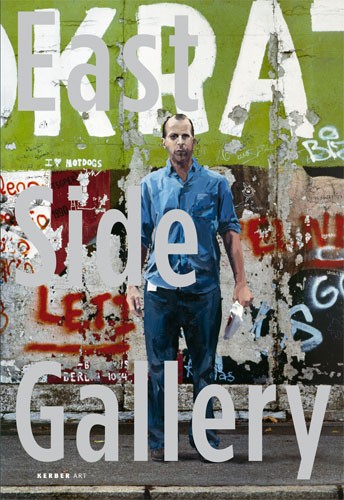 Events
The illustrated book was published on the occasion of the exhibition “Marc Lüders. East Side Gallery”, 2008, Thomas Levy Galerie, Hamburg.