Categories
Information
Close menu
A major exhibition of icons is set to mark the 50th anniversary of EIKON Gesellschaft der Ikonenkunst e.V., a body of friends and supporters of the Icon Museum in Recklinghausen. Both the exhibition and catalogue will present some 200 painted wooden icons from Greece, the Balkans and Russia, dating from the 15th to the 19th century. Also included are 125 Russian metal icons and other precious examples of wood craft, embroidery and gold work, privately owned in Germany, Belgium, Switzerland and the Netherlands. Among the works are some absolute treasures that have never before been seen in public. The icons on display in this exhibition represent the entire spectrum of Orthodox iconography, in particular icons of extreme rarity, such as life icons of Russian saints and portrayals of the founders of convents or monasteries together with their particular convent or monastery, in addition to hymns (Magnificat) and prayers (Our Father). 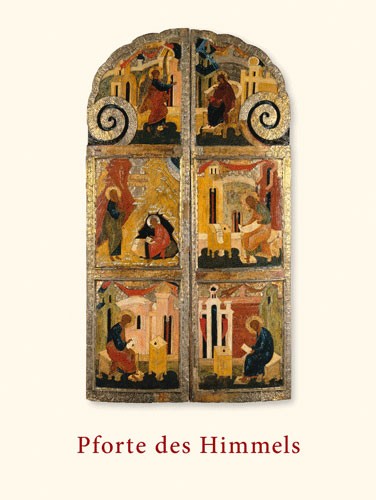 Events
The illustrated book was published on the occasion of the exhibition “Pforte des Himmels”, 2008/2009, Kunsthalle Recklinghausen.