The Light Aesthetics of the Classic Avant-Garde

Close menu
At the beginning of the 20th century, electric light was a symbol of modernity, with a great influence on architecture, theatre, painting, sculpture, photography, film and music. Many artists developed their own ideas and designs for contemporary aesthetics influenced by light. Bauhaus artists working with the master of form László Moholy-Nagy created the core of the new movement from 1922 onwards. They experimented with the media of photography, cinema, advertising, interior design and architecture. In 1930 Moholy-Nagy designed a “contemporary room”, a constructed programme for the art of the future dominated by “new media” and kinetic objects. Kunstlichtspiele focuses on this room, as well as collecting a great number of key works of the light/art movement from the beginning of the 20th century, and including in-depth essays that approach the theme from a range of different angles. Artists among others Marianne Brandt, Robert Delaunay, Walter Dexel, Lyonel Feininger, Wenzel Hablik, Raoul Hausmann, El Lissitzky, Hans Luckhardt, László Moholy-Nagy, Christian Schad, Hans Scharoun, Hans Richter, Arthur Segal, Bruno Taut 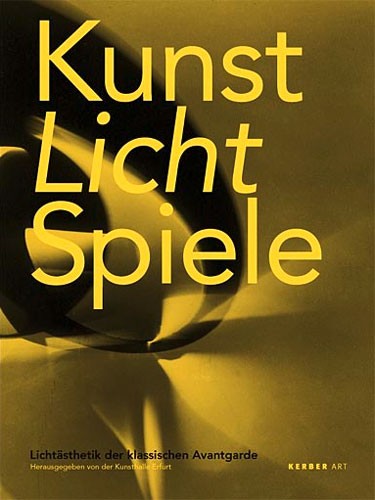 Events
The illustrated book was published on the occasion of the exhibition „KUNSTLICHTSPIELE Lichtästhetik der klassischen Avantgarde“, 29 March to 24 May 2009, Kunsthalle Erfurt.