Close menu
„Club Mama Gemütlich“ is the name of the main work in this catalogue and also the title of the exhibition by Dutch artist, Christiaan Bastiaans, who up until now has been known mainly for his installations, sculptures, drawings, collages, photographic and video work inspired by his travels in areas of conflict throughout the world. The single, unified installation, which was designed specially for this project, is based on a combination of field hospital, mission post and night club, and presents a refuge in the no-man’s-land of an unnamed conflict zone. A film of the same name, featuring “La Vivre”, played by Jeanne Moreau as the main protagonist, is a central element of the work. The installation comprises several film stills as well as excerpts from the film script. Some of Bastiaans’ major works from recent years are also featured, contextualised and complemented by extracts from the artist’s diary. 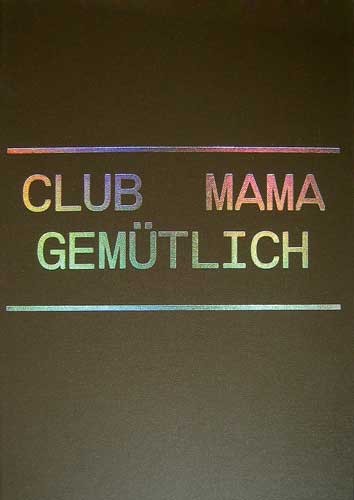 Events
The illustrated book was published on the occasion of the exhibition „Club Mama Gemütlich. Chriatiaan Bastiaans“, 30. October 2009 to 21 February 2010, Kröller-Müller Museum, Otterlo.