Categories
Information
Close menu
During the year of its 80th anniversary, the Bielefeld art association moves closer to its city. This is not to be understood as a historical examination of cultural history, or an encyclopaedia of the art scene of today; instead this artistic view is an investigation that focuses on some points concerning the past and the present. Artists who are working on the theme of Bielefeld for the first time as well as others who have always played an important role in the city, use their contributions in an attempt to trace the identity of Bielefeld. This is shaped by the subjective viewpoints of individuals, and also interacts with the complex body of city, interior and exterior views as well as direct and indirect references. The documentation of the project inspires further questions regarding social and cultural memory in the urban context, which ultimately can be applied to other cities. Artists among others Artists Unlimited, Jörg Baier, Katinka Bock, Peter August Böckstiegel, Kilian Breier, Pierre Cordier, Alex Gerbaulet & Ines Meier, Hein Gravenhorst, Karl Martin Holzhäuser, Gottfried Jäger, Korpys & Löffler, Niklas Luhmann, Wolfgang Müller, Julika Rudelius, Carl Strüwe, Günther Uecker, Elmar Zimmermann 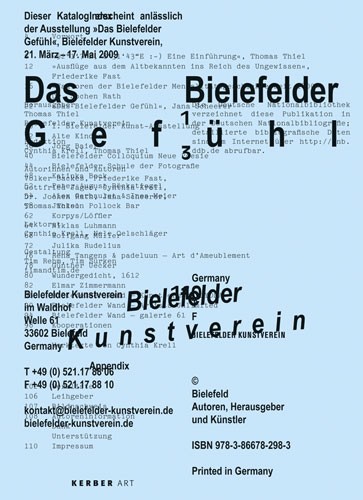 Events
The illustrated book was published on the occasion of the exhibition „Das Bielefelder Gefühl“, 2009, Bielefelder Kunstverein.