Close menu
This anthology contains 30 texts on the subject of picture theory, which were submitted and debated as part of the Bielefelder Fotosymposien (Bielefeld Photo Symposiums) from 1979 to 2009 and helped to build the Bielefeld school´s reputation for photography. The selection of texts is based on the idea of a quintessential history of theory, from which the intellectual development of the medium of photography over an extended period of time can be deduced. Key terms such as auteur photography, photography as a weapon, concept and generative photography, photography as discourse, are mentioned throughout, as are the names of well-known figures from the history of art, media theory, iconic practice and current visual culture. This collection covers the comprehensive thought processes, which have existed side-by-side with the photo as the medium par excellence of our time and which have been crucial to the artistic success of the photo. 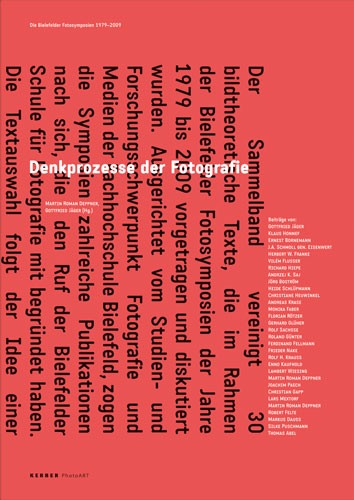 Events
The illustrated book was published on the occasion of the 30. Bielefelder Fotosymposium, 26 to 27 November 2009, Fachhochschule Bielefeld, Fachbereich Gestaltung, Bielefeld.