Pictures and Non-Pictures//Project Art. An Introduction to Project Art

Close menu
“I do not see myself as a political artist at all. On the contrary, I am interested in what art is currently doing, what types of material are available to artists.“ Faulhaber’s statement is initially disconcerting and does not seem to tie in with the themes and keywords found in his projects, which constantly deal with politically charged content. Although he has broken away from the traditional concept of work and is now concerned more with performance, he fulfils one of the most important objectives of art: he holds up a mirror to society in his work. In his publications, he uses existing images and information, collecting and recombining them to specifically evoke a sense of confusion – which itself becomes a political act. This collection documents Faulhaber’s most important campaigns and outlines the current links between project art and visual culture. 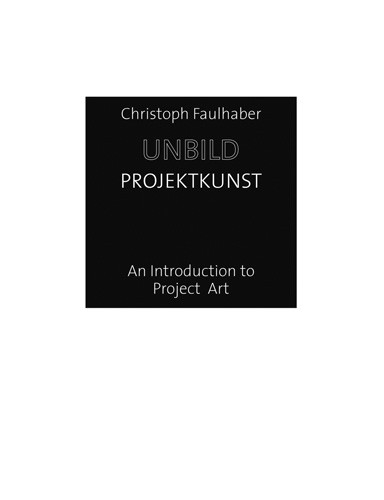 Events
The illustrated book was published on the occasion of the exhibition Christoph Faulhaber. Unbild//Projektkunst. An Introduction to Project Art, 1 May to 25 July 2010, Rudolf-Scharpf-Galerie, project space for young art of Wilhelm-Hack-Museum Ludwigshafen.

it`s you. Space Perception – Daily Patterns – Closed Circuits
€25.00
( 30.70CHF )
Details
Trusted Shops Reviews Toolkit: 1.1.7
We use cookies on our website. If you stay on the site and continue browsing, you agree to the use of cookies. Further information can be found in our privacy policy.
Accept