Close menu
FURUSAWA Iwami (1912–2000), born on the island of Kyushu, began his training as a painter in 1928 on at the Hongô Institute in Tokyo. After an initial interest in traditional Japanese painting (Nihon-ga) he then examined Western painting (Yo-ga). From 1943 to 1945, he served as a solider in Japan’s war with China and returned in 1946 from a prisoner-of-war camp to his homeland. The artist’s experiences during the war were of crucial import for the rest of his life. In 1960, he began to transfer his drawings from the 1940s using printmaking techniques. For more than thirty years he worked on the Shuragaki cycle (The bloody meeting with the hungry demon in hell), which he completed in 1993. Subjects like death, hunger, rape, looting and the landscape of China define his most powerful etchings and show the horrors of war. Furthermore, FURUSAWA’s works give evidence of his background in Japanese pre-war Surrealism. 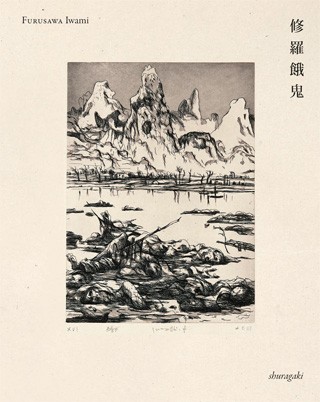 Events
The illustrated book was published on the occasion of the exhibition "Furusawa Iwami (1912—2000) Shuragaki", 2006, Kunstsammlungen Chemnitz.