Close menu
Daniel Spoerri made his name as a visual artist with his ‘snare pictures’ and as a pioneer of Eat Art. In his 80th year, Spoerri pays homage to Hans Arp, after whom the Arp Museum is named, with his work entitled Weißt Du, schwarzt Du? (Black on Wise), which is also the title of one of Arp´s poems.
The exhibition in the Arp Museum and the accompanying catalogue feature 130 distinguished works dating from the 1960s right up to Spoerri’s most recent works. Included in the exhibition are the large-scale Prillwitz Idols bronzes together with a variety of wooden and bronze sculptures, fascinating picture series and the famous ‘snare pictures’. For the first time also we have an opportunity to see surprising objects from Spoerri’s private collections, illustrating his love of magical objects and identifying him as a passionate ‘archaeologist of flea markets’. 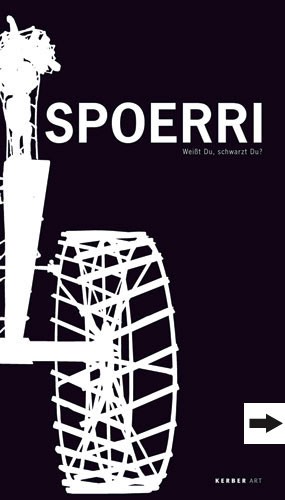